Working with various living  history sites and organisations, I have been fortunate enough to pick up a  few useful craft skills over the years.

One that I have developed enough to be able to demonstrate at events is working with silver.

The Vikings used silver as a  trading currency and very often pieces of jewellery are found that have  hacked into smaller pieces for weighing out.

This jewellery was often re-cycled into new items and the decoration of such items was usually  quite simple and occasionally quite crude.

Using stamps and chisels, the  original craftsmen produced a variety of designs that look far more  complicated than they are to produce.

Working with the same tools I  could usually do a fair job of imitating their work.  So it was with  great interest that I spotted Ædwen’s brooch in the British Museum.

Here was a  brooch that looked like it had been made by someone completely out of  his depth. That is not to say the maker was not skilled, but I suspect  his skills were more suited to the forge that to silver working. 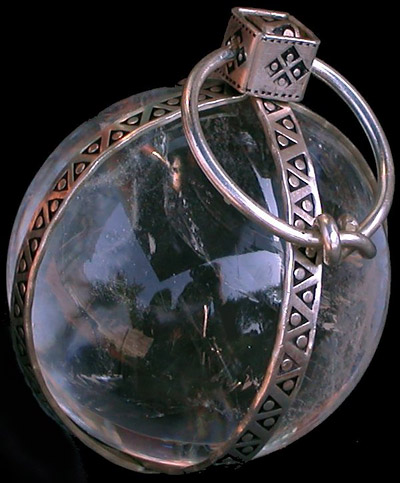 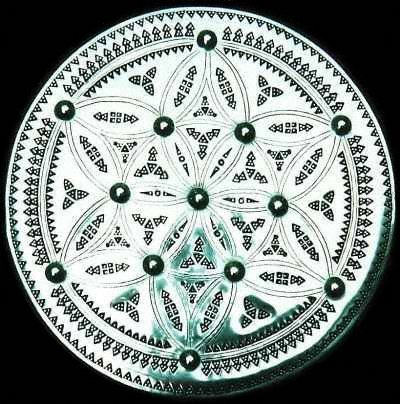 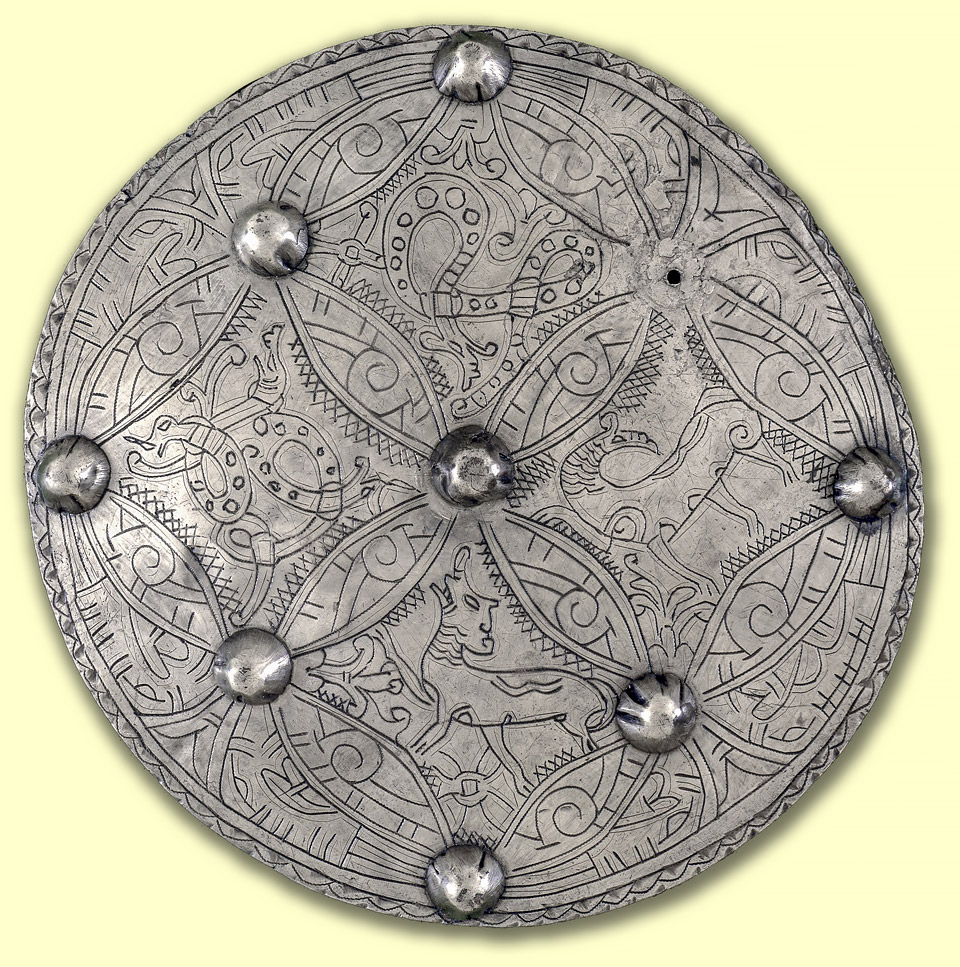 I suspect that someone of reasonable, but not great, wealth has approach the only smith they could find and asked them to make a big impressive silver brooch. The smith has had a fair go at it but there are so many mistakes that I bet he wished he could have had another go at it.

My first thought was  ”I wonder what his second try would have looked like?”

My second thought was ”I wouldn’t mind having a crack at that..”

That was where the idea for the  Whitby Brooch came from. I have seen a couple of careful reconstructions of Ædwen’s brooch, sometimes referred to as the Sutton/Isle of Ely brooch. You cannot miss them being worn because they are big, about six  inches in diameter. If two re-enactors with the same brooch stood together it would be like that awkward moment when two debutantes turn up wearing the same dress.

The more I looked into the details of the original the more interesting it became.

The beasts in the major panels  were of a Scandinavian style and yet the brooch appeared to be Anglo  Saxon. There was an inscription in Anglo Saxon that is usually  translated as:

”Ædwen owns me, may the Lord own her.

May the Lord curse him who takes me from her,

unless she gives me of her own free will”

There is also and unintelligible runic inscription on the pin plate. That plate has been damaged resulting in the loss of one of the domed rivets and that could have been because of rough handling, perhaps being torn from a garment, who knows.

It was found in a lead casket, with about one hundred silver coins of William the Conqueror  (1066-87), five heavy gold rings, and a silver dish or disc. It seems to have been deliberately buried but not recovered for some reason. I like  interesting stories like that. It gives me something to talk about with visitors on a living history display.

I set about working on the design.

The first thing to do was  properly lay the panels out, using a compass instead of one eye and  hopeful wish. The rivets looked like they had been hammered into a piece of wood which had caused them to fold rather than form properly. Both of those things were easy to correct.

Looking at the beasts I thought I could do something interesting. I really liked the boars around the edge, I thought they needed no improvements. The serpent was reasonable too so I would follow him fairly closely. The other beasts were all so derivative that they appeared to have been copied by someone that didn’t quite understand what he was copying. I decided to re-design them.

As I considered how to do that I started thinking about a theme to link them all together and it  occurred to me that some of these creatures appear in the Norse mythology. As I thought of it I remembered the conversation between Debs and I in Iceland about making a cloak depicting the major characters  from the Nordic cycle. (That conversation was to lead to the Norse Cloak of Myth, although I did’t realise it at the time.) I had my theme.

Some of the  original panels were difficult to interpret so some of them became  Ravens and others foliate motifs. The main panels would be a serpent, a wolf, an eagle and a goat all of which are associated with the Gods or Laerad, the great world tree. 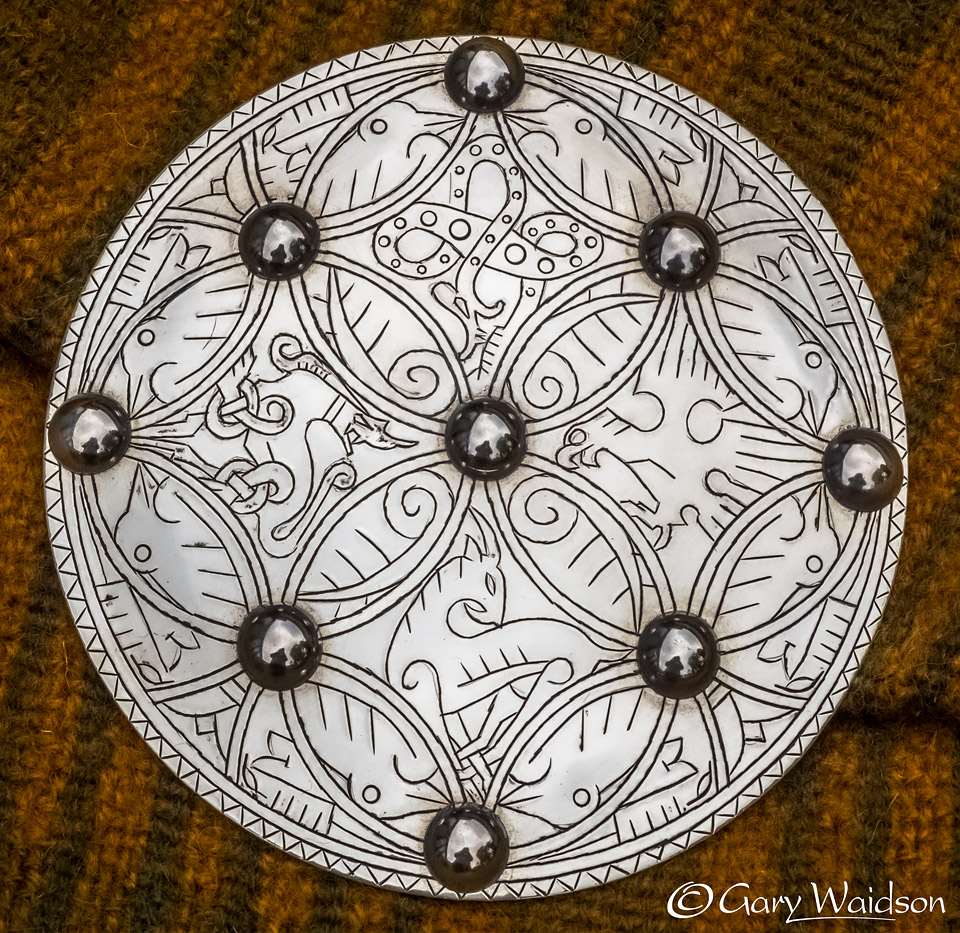 So why did I call it the ”Whitby Brooch“? Why not Ædwen’s new brooch or something like that?

Well, quite simply, I made it while working with the public at Whitby Abbey on my first living history event back with the “Vikings Society” after a few years gap.

I couldn’t say whether mine is better than the original or not, that will always be a matter of opinion, but it is certainly different from the other replicas around so this brooch can definitely be worn to the ball. 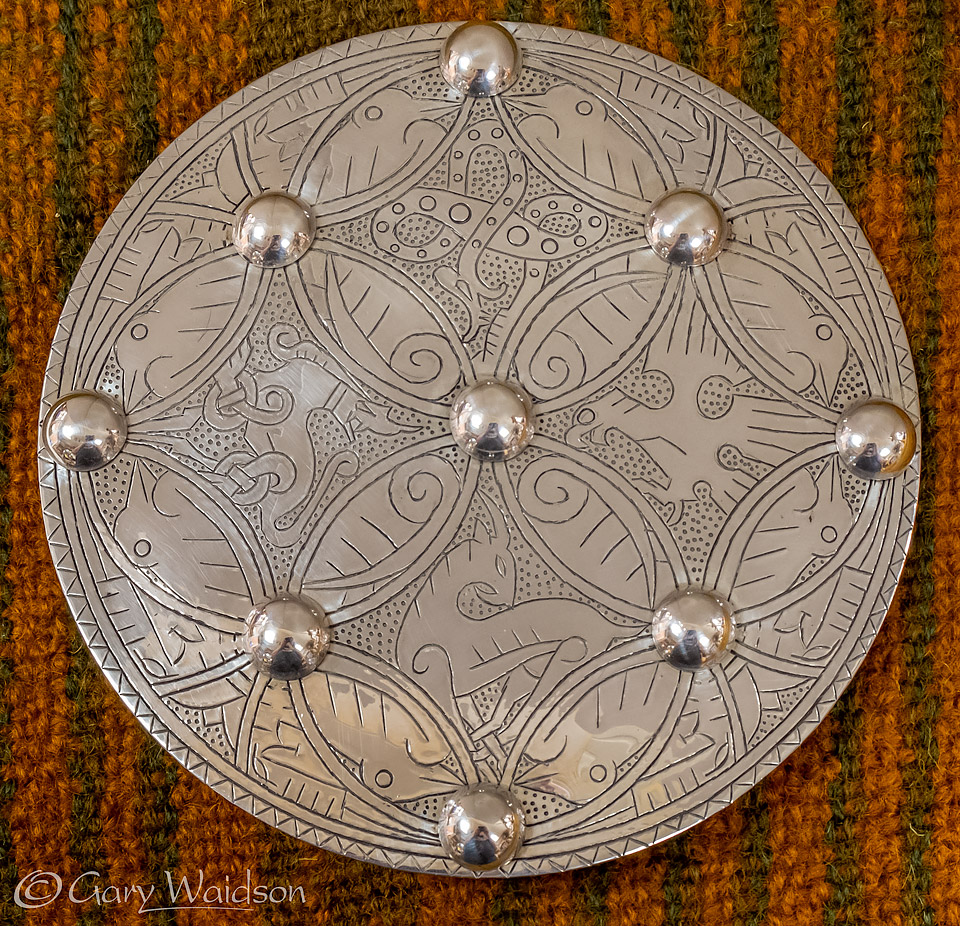 Following the completion of the engraving on the Beowulf Codex Treasure Cove, I decided that the dot punched background shading that I had used on that was just what the Whitby Brooch needed to finish it off.

As you can see from the design, I had intended to use cross hatching as the maker of Ædwen’s brooch had originally tried but decided that it would not fit in with the organic shapes of the creatures and I left it clear, which I was never quite happy with.

The dot punch finish works with it much better I think and finally I am satisfied with it.