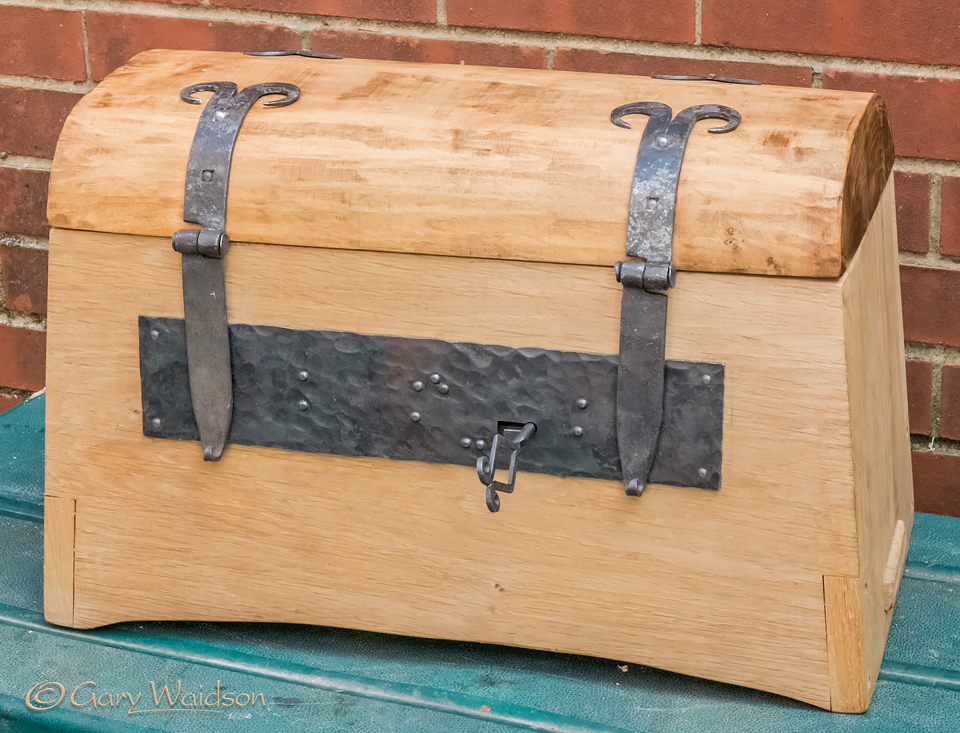 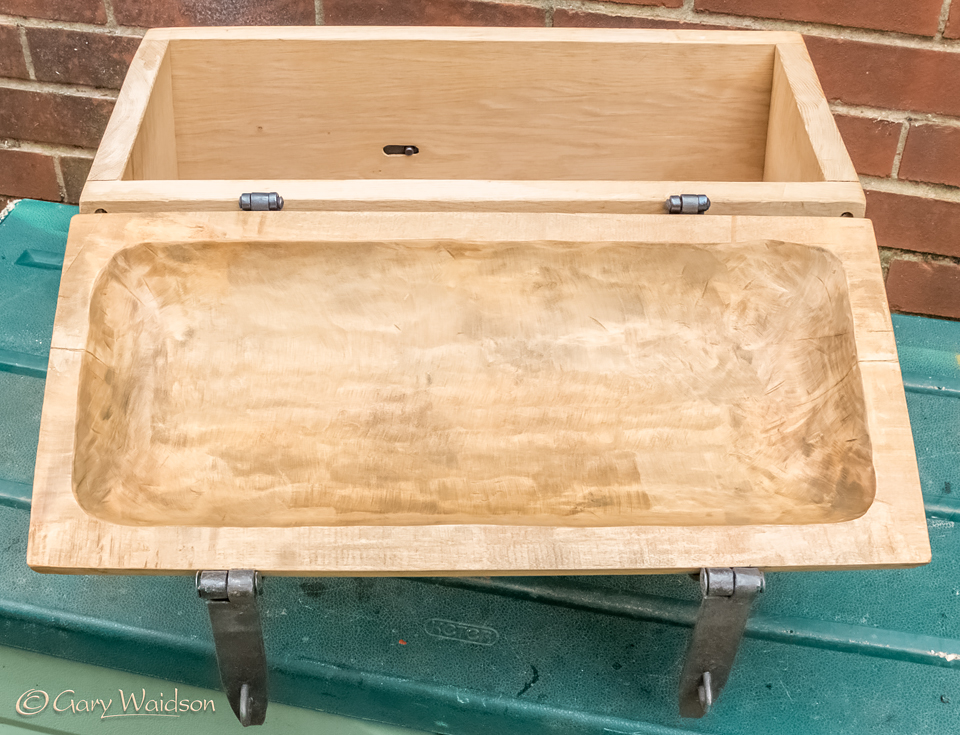 Over the summer of 2015 I challenged myself by creating the Wayland Kista, a six plank Viking style chest carved with scenes from the story of Wayland or Völundr as the Old Norse stories call him.

For a long time, I have also hankered for a smaller chest or casket with a Norse style plate lock and this is to be one of my projects over the summer of 2019. 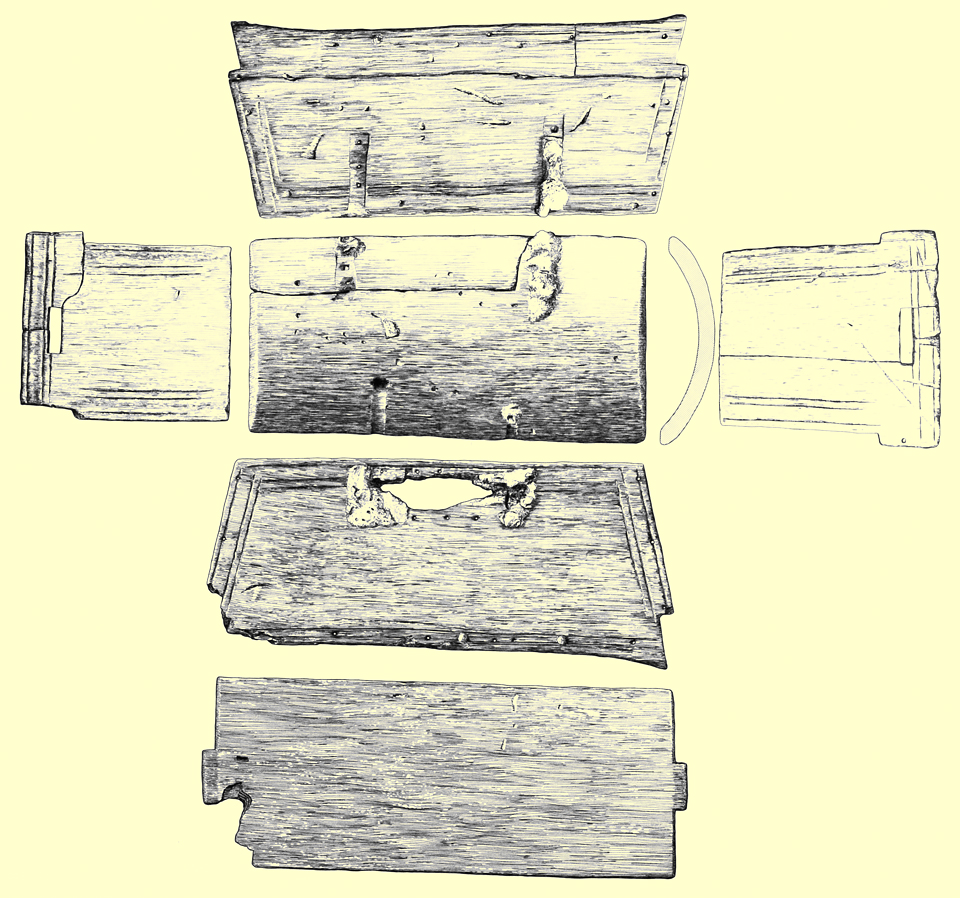 My starting point is going to be the so called “Hedeby Sea Chest” a nice box found in a position which must have originally been the bottom of the harbour. It’s lock plate had been forcibly broken and it was found weighted down with a stone.

This box had an intriguing story of it’s own even before I started to work on it.

Personally I’m not so sure that it was actually a sailors sea chest, I might be wrong but it seems too small for the job and lacks the bottom clearance that I would want for a chest sitting on a deck periodically swamped with water.

Never the less, for my purposes it is ideal.

I started constructing the case in 2016 from solid oak planks and a good friend sourced a half trunk of maple for carving the lid. I purchased the hinges in 2018 and  at the Jorvik Festival in 2019 I found a suitable plate lock.

Carving the lid was more challenging than I expected, it turns out that maple is actually a bit harder than oak which I did not know when I started.

Nobody knows for certain why curved lids like this evolved but the design continued to be used for centuries with later examples being coopered rather than carved out.

I temporarily fixed the fittings with short wood screws to check their positions and work out the areas free for carving and now just had to decide on a theme. 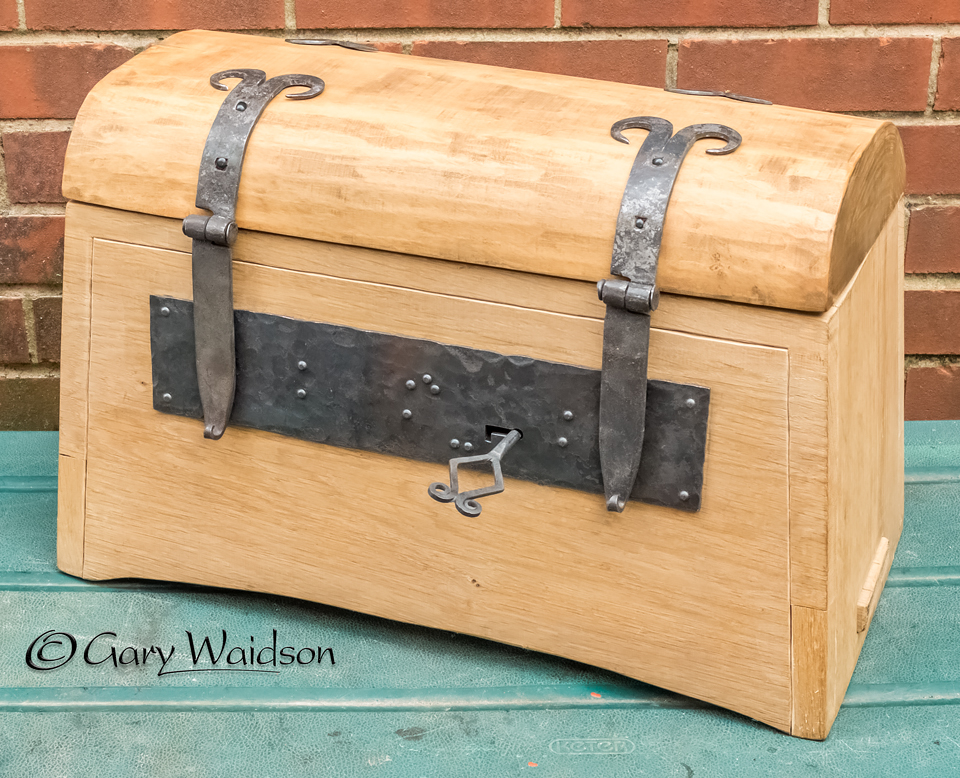 The ancient story of Wayland had been an obvious choice for my kista because of the nickname I have been known by for so many years, the next most obvious choice was to follow the connection of the logo I have used in my business for almost as many years.

The one eyed mask you see at the top of this page is a simplified depiction of Óðinn based loosely on a carved face found in the Oseberg ship burial.

It is fair to say that back sometime in the last millennia when I created that Óðinn logo, which I still use today, I did not know as much about the mythology as I know now.

Óðinn was originally a sort of psychopomp, mainly responsible for guiding the dead to the afterlife. His promotion in the latter Viking Age to some kind of “Father of all the Gods” seems to have been rooted in the turbulent religious politics of the time. The followers of his cult were usually the rich and powerful and he was certainly never a trustworthy god.

He was known under many names as he often travelled around the Norse worlds inciting trouble and strife. Hárbarðr ( Old Norse for “Grey Beard” ) is one of those aliases that he used when he apparently met and abused the more popular god Þórr in disguise. Although it is never clearly stated that it is indeed Óðinn, Hárbarðr is also given as one of his names elsewhere.

I decided the logo itself might not be quite what I had in mind for the casket but there are a number of other creatures associated with him. His ravens, Huginn and Muninn, His wolves, Geri and Freki and of course his mysterious eight legged horse, Sleipnir.    I decided they might well suit this project.

Time to work out the details of the design now.

I have seen many faithful copies of original artefacts which are wonderful pieces of work but when a dozen people at an event are all walking around with copies of exactly the same item, which would have been handmade and unique in it’s day, then the accuracy that they are striving to achieve is compromised somewhat in my opinion.

I prefer my work to be unique. Using the methods and style of the artisans who made those originals, but not slavishly copying them. My work is inspired by but not identical to those original artefacts.

In a place called Mastermyr a chest full of Viking Age tools was found in a bog. It is unknown whether  it was deposited there deliberately or by accident but it is a fantastic resource for living historians because it shows us what kinds of tools were available.

It also gives us another chest to compare and there was a plate lock on the chest in good enough condition to work out how it functioned.

At the top of the picture above you can see the remnants of the lock as it was found, below that is an illustration of how it would have functioned and at the bottom is the flip side of the one I have fitted to my casket. As you can see, although it has been simplified slightly, It functions in much the same way.

At last I had all the pieces in hand to make a start. 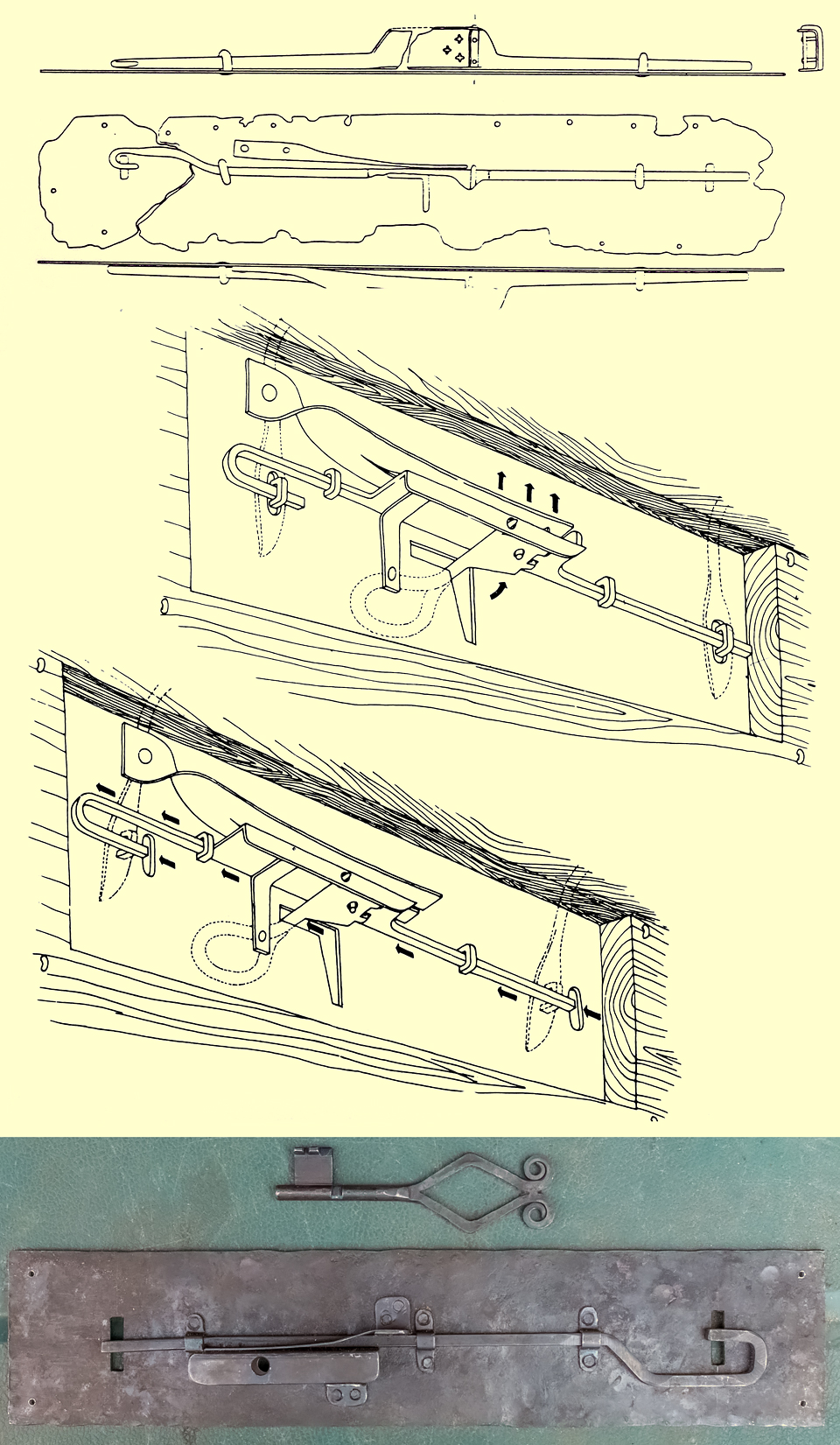 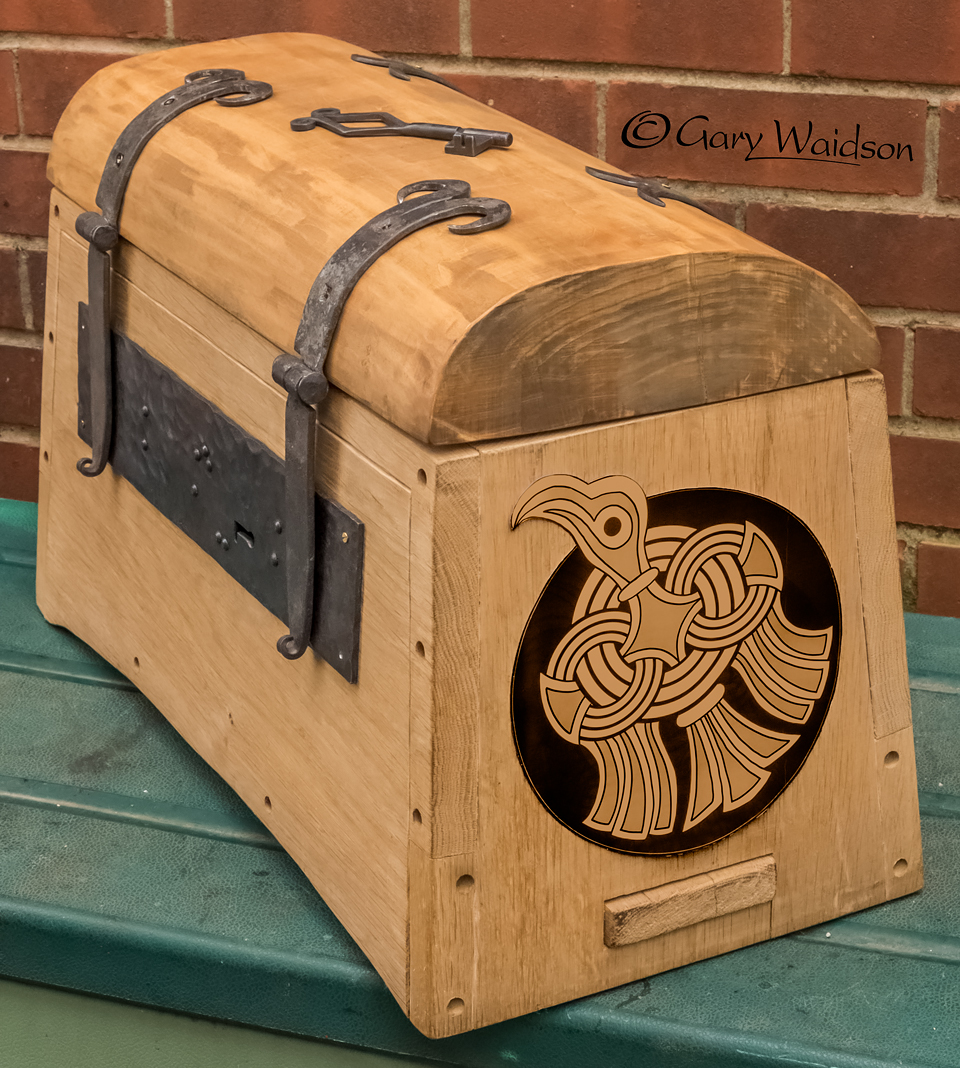 After a few days experimenting with different layouts and designs, most of which seemed too crowded, I decided to keep things simple.

Two Ravens, Huginn and Muninn perhaps, one on each end which leaves the face and the back for maybe a little more line work similar to the Hedeby example.

The design is a hybrid between a coin found in York and clothing hooks found in Timerevo, Gniezdowo  and Birka. I’m happy with the scale and positioning as shown in the picture above now.

The next thing I have  to do is remove the temporary screws holding the box together ( It will eventually be constructed with wooden pegs ), transfer the design to the wood and then I can get to work on the carving. 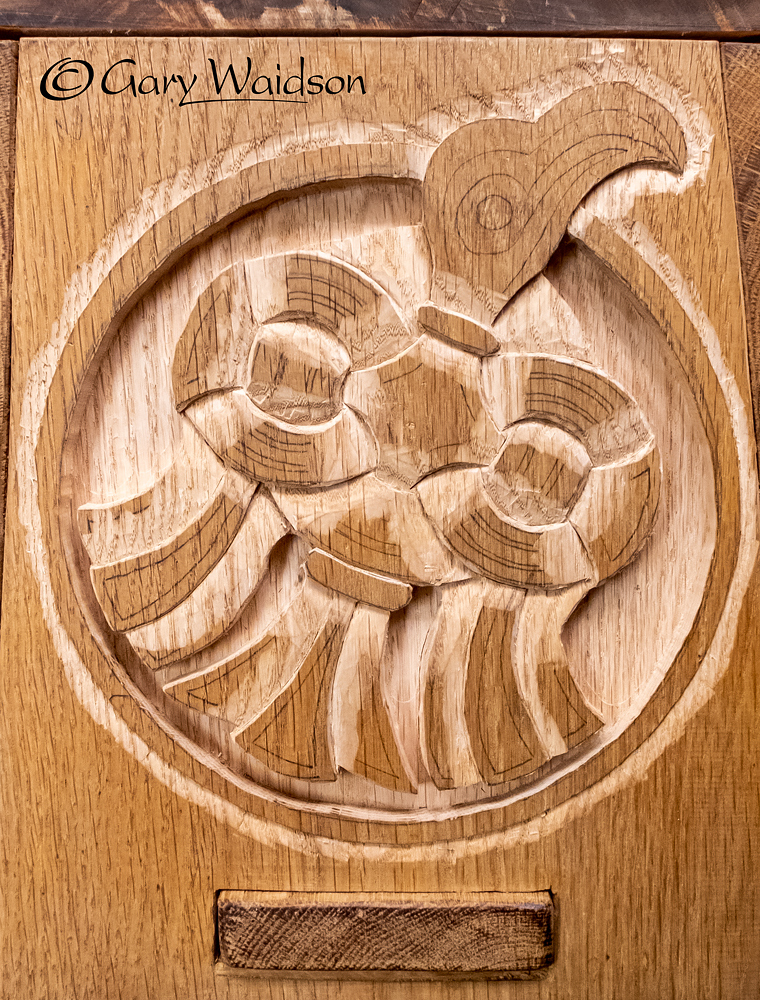 So, after more delays and distractions than I can shake a stick at, I finally got around to the carving work.

The background was roughed out with a router before starting the manual sculpting of the ravens with a chisel.  The other end is more or less the same at this point.

There is still a lot of work to do of course but it will have to fit in between school bookings which are picking up again after a quiet start to the year. 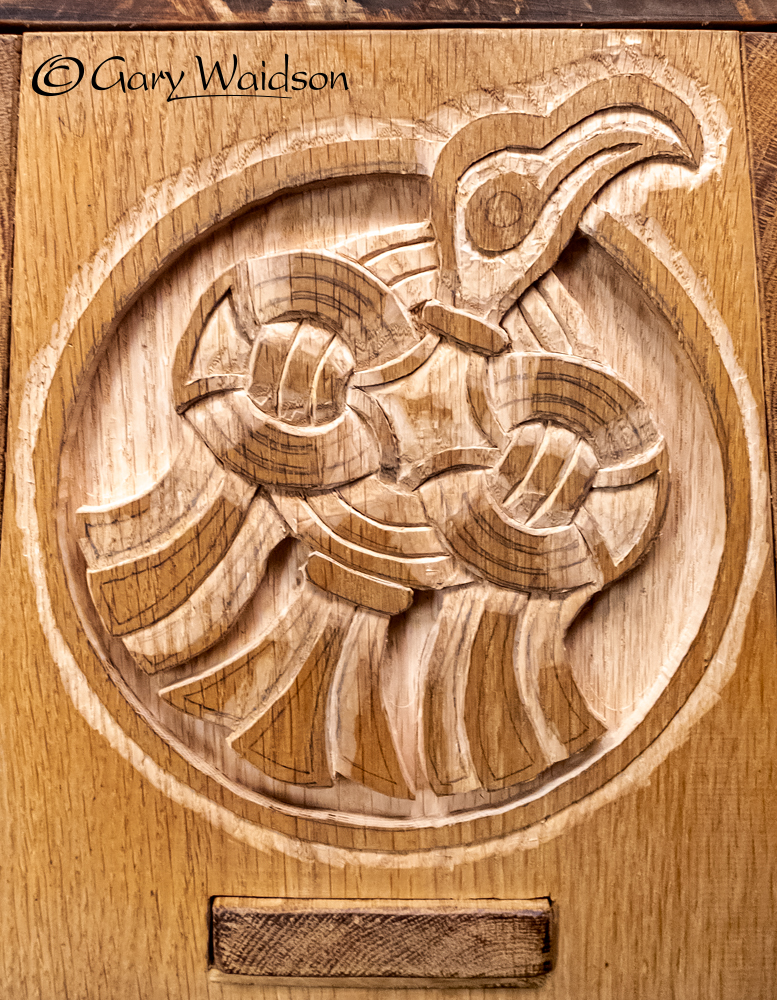 Got a little bit more done this morning, working in schools this afternoon and tomorrow so the rest will have to wait until Thursday. 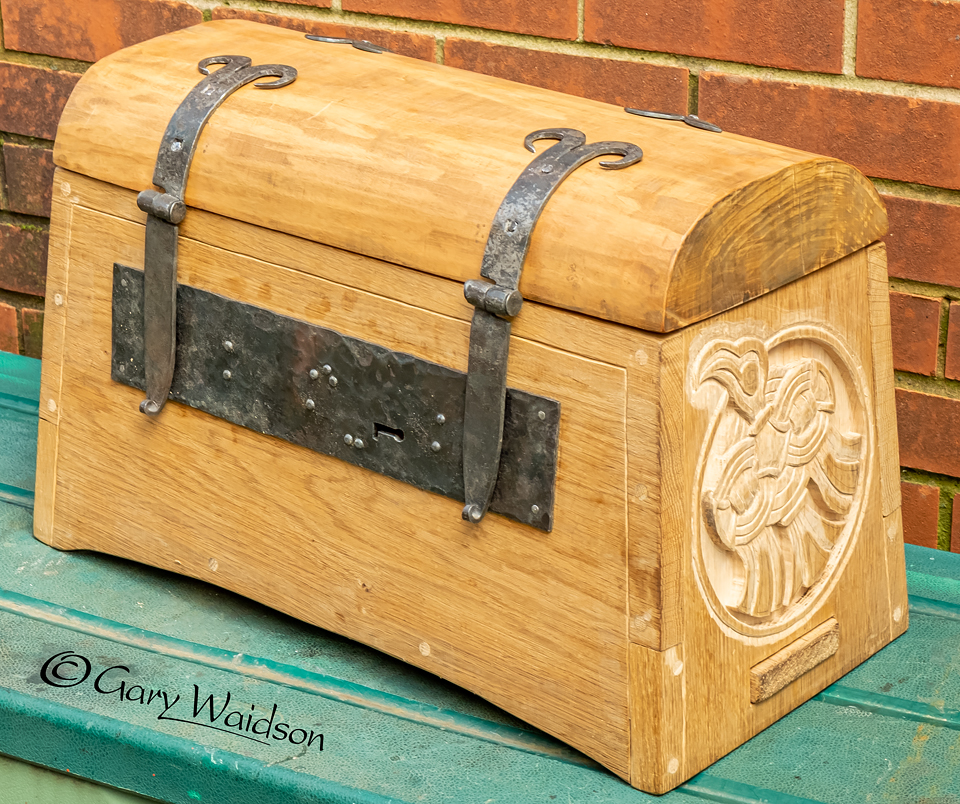 A fair bit still to do but nearer to finished than started now I reckon.

All properly pegged with oak pins, the ironwork is riveted on and I'm starting to get my head back to where it needs to be for carving the details.

I've just been given a long holiday by the government closing all the schools because of the Corona virus.

Not really unexpected but falling at an unfortunate time for us as the next couple of months are the time we usually build up some funds to see us over the  long summer holidays.

Still, we are a lot better placed to weather this storm than many so no complaints and time to finish some of the projects I've had on the back boiler for a while. 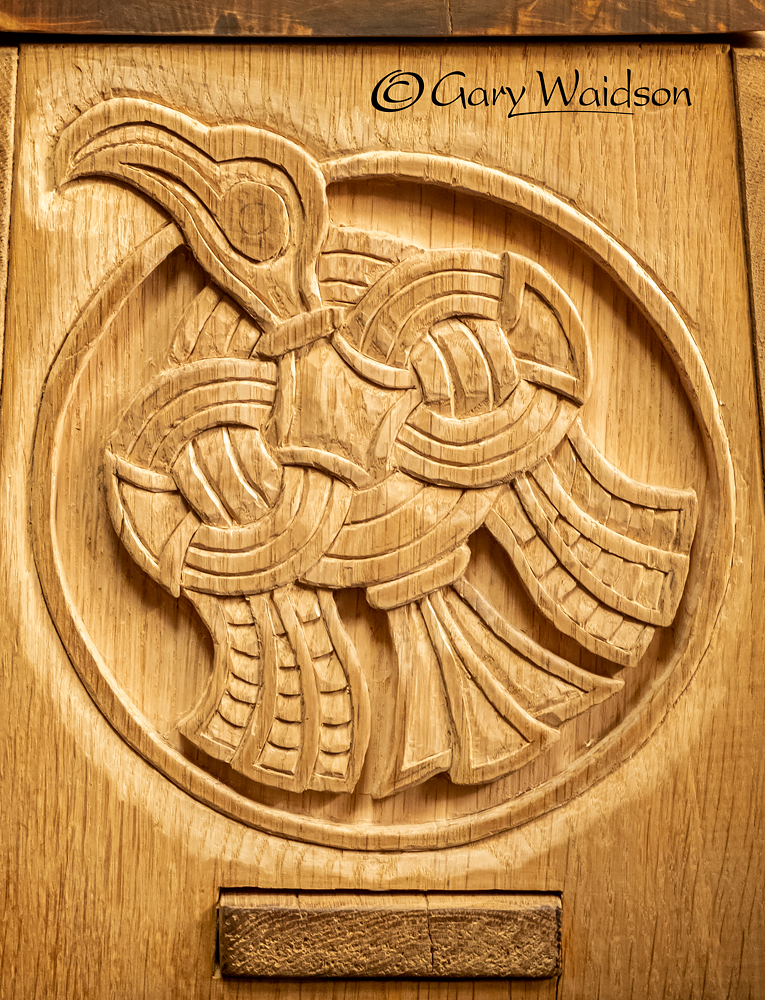 This is Muninn, nearly finished. When I was carving the Wayland Kista, I found that fine detail was best left until morning, when my fingers were less tired, so I'll finish him off tomorrow. 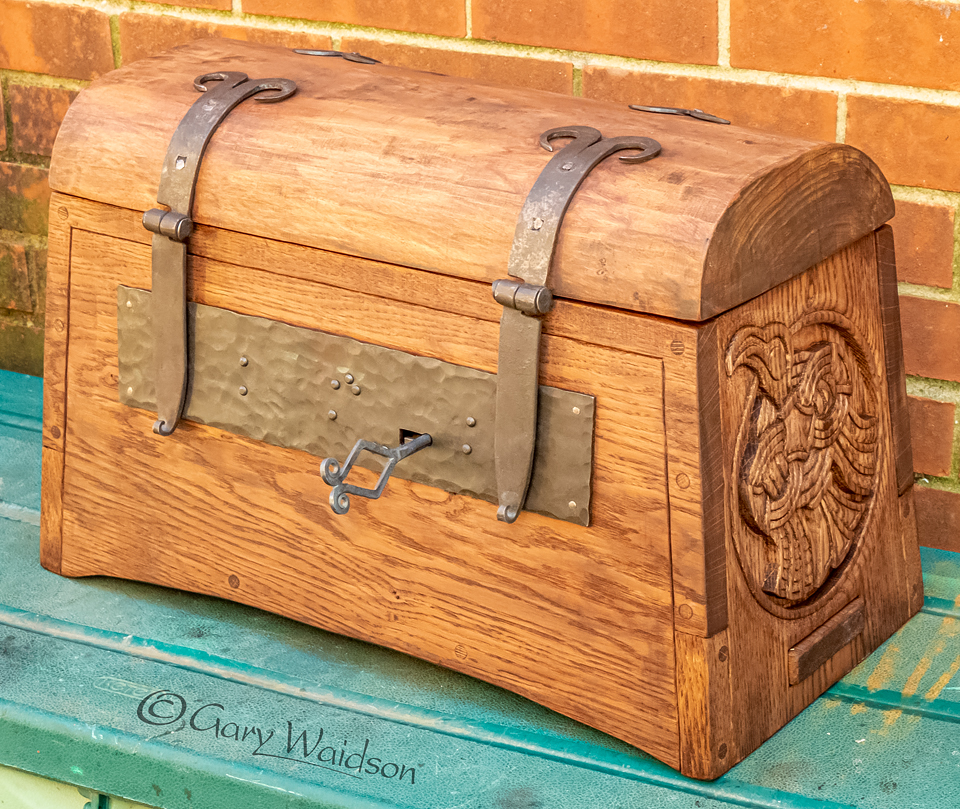 After a few experiments, I found a combination of stains and waxes that produces an similar finish to the tar and oil I used for the Wayland Kista.

The advantage is that it is a lot faster and quite a bit cleaner to use. ( The Stockholm tar remained sticky for a considerable period of time. )

This is the casket after its first coat of woodstain ( Walnut ) 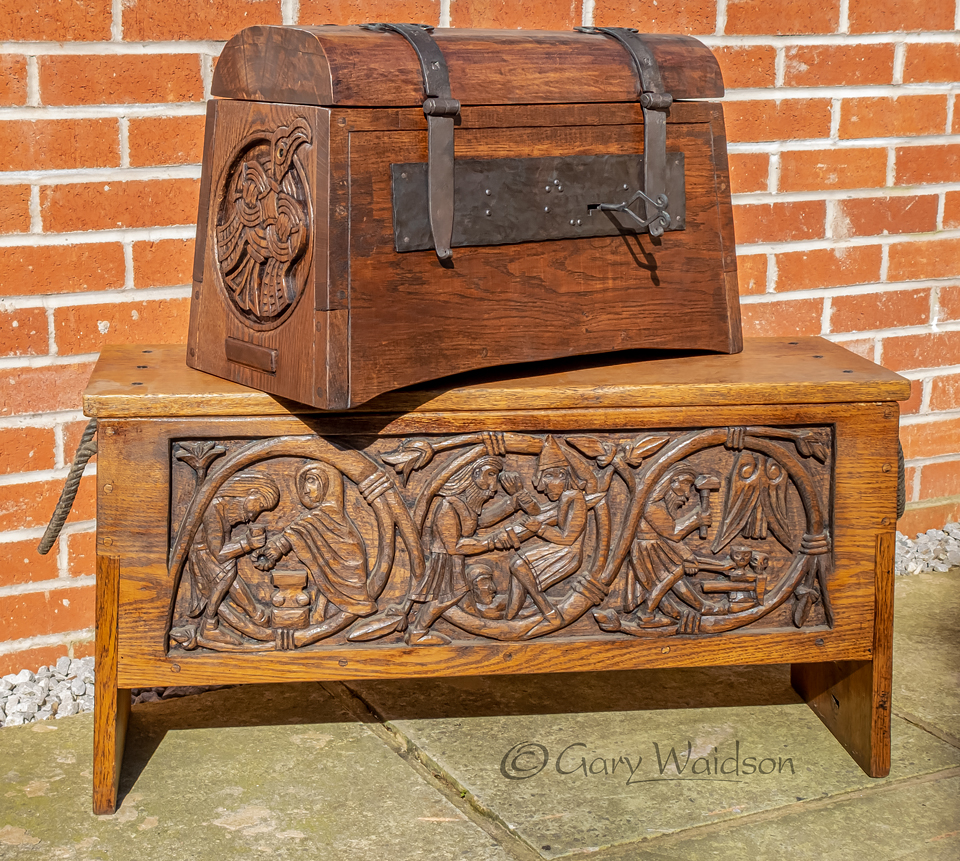 A little darker than intended but with a little elbow grease and rubbing it down with a rough cloth, I’ve got pretty well the effect I am looking for. It will certainly mellow with age.

Just waiting for some jet for the eyes now. 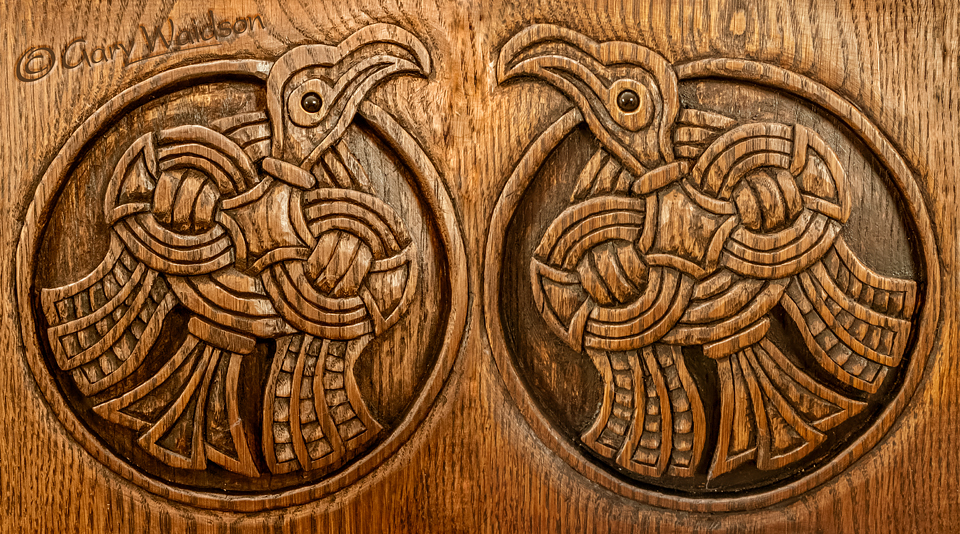 Eventually the jet eyes arrived and it was a simple enough job to set them in.

This is a composite picture so that you can see both ends side. Not a dead match but close enough to be brothers. 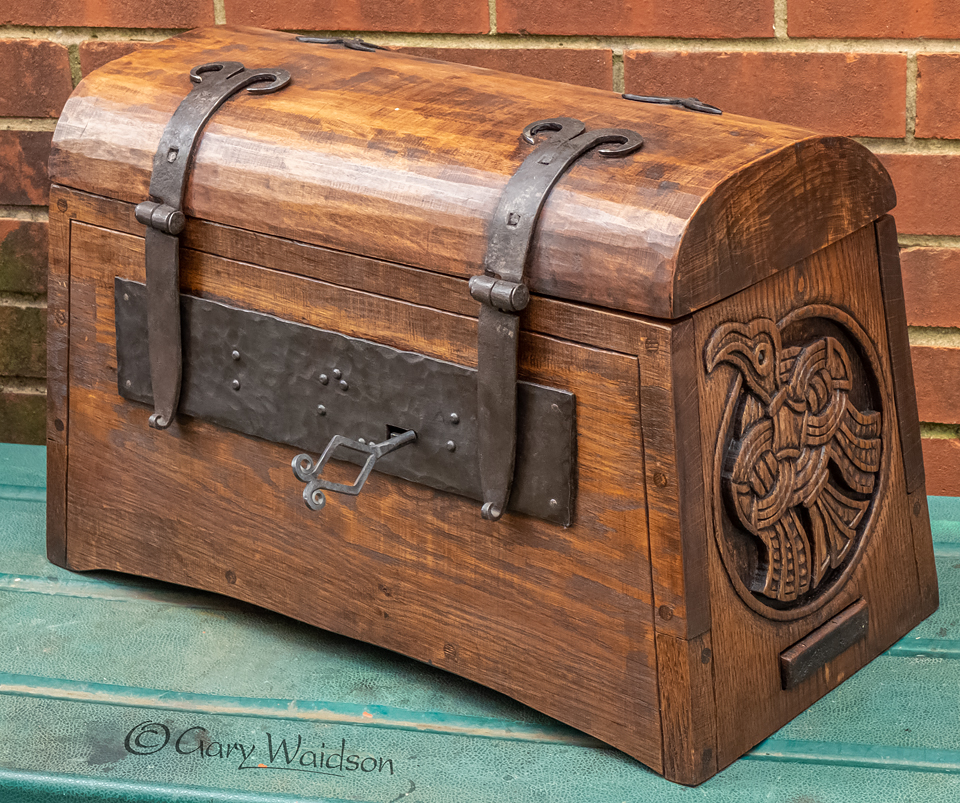 This will be used to contain some of the nicer, more precious items, both at home and on camp.

Postscript: Following a number of requests to use the designs you see on this website for everything from tattoos to tee-shirts, none of which came with any offer of payment for the work that I put in to create the designs, I need to make something clear.

If you want free artwork  for your commercial projects, May I suggest you go and do some research and create your own designs, there is plenty of inspirational material out there to work with.